that wrecking ball dealt with on Masonic,

the shortbread girl who stood near Union Square

will pick me up like crumbs before ravens take me;

she will be my daughter, my Persephone, my shoulder to crawl upon,

like a mouse or a caterpillar in Autumn winds in forests,

or a broken man who listens to David Bowie

while his planet asked him for divorce.

tell me February is never gone, waiting in a brand new window -

removing one letter, otherwise he stays the same.

adding another, but most tellingly two fresh new letters.

These letters are O and E.

I've never been to Ohio, I've never had a sex change,

I did however give Hal back his H by accident,

he was courteous about it, but later I heard it rattling in a trash can,

I am all of the latter nouns, which Carole pointed out to me

I have nothing left for E, except the word "Eventually",

which is what everyone and everything does to me,

over time they leave, eventually. I get used to it

For a man who died in County Galway, Summer 1980

that got trapped in light and dusty curtain,

and the cancer that had only recently cleared,

exciting the sleep from a newscaster's

then an interlude from Brahms

finishes off the rest of us

Gillian somewhere in this aether

from some liminality in England

that people occupy in ticking tocks of tea and bitter,

tractors driving past on Tuesday.

I found Gillian’s book, sitting on a radiator in a hospital ward,

sterilising itself as best it could

from dry-rot and AIDS, and things that silently capture

I sit here wondering if I’ve got cancer, or if not -

what it was that caused Gillian

to lose touch with this book

is not so simple.

This is all I know of Gillian,

from a black-rot seat in times differing to these,

clocks and watches and clothing she knows.

There are other Gillians lurking here, be aware.

They too will appear, when they’re good and ready,

to share their diseases and dolls, their swear words and sadness 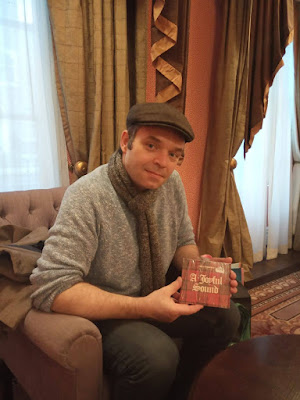 John Doyle is from County Kildare in Ireland. He returned to writing poetry in February 2015 after a gap of nearly 7 years. Since then he's had 6 poetry collections published, with a 7th collection, "Isolated Incidents" due to be released by Pski's Porch in Summer 2021