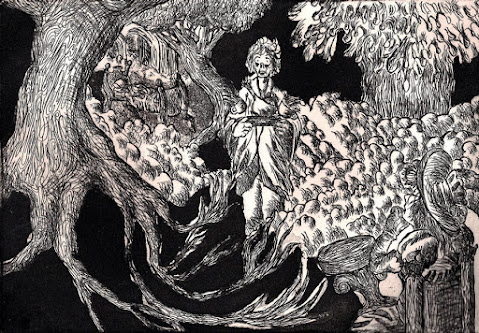 held us all in thrall.

priest flirt with her

on a bus in Rome?

Did she not lunch on

Hall’s work in the fine

Where does the moon go

in daytime? And she

whose autumn leaves we

turned in our fingers

to afford a hat,

a spell, a peach. Now

let us take up again

Let’s find no rule to

forbid the dream of

what it is we’re

meant to do, even

in the face of life

of the packet boat

in a dirge of birds

I came to the dream

the floor with no urinals.

on a single Ambien,

walked across the yard

in a strappy chemise,

A tightrope of that

of an English garden,

At it again, undoing the earth,

up into light and rain,

tunnelling for the sake

of mystery into avenues

ragged-toothed as an old woman

her hair half gone,

her voice a whisper.

this rodent, no shovel,

except for the grey fur.

In no hurry to remedy

territory for the sake

of a secret wish.

The only news the news.

Listen to the chimes tell

I promise to be your vault

if you tell me, your arm

at an angle, how a bone heals

stronger than its break.

with ricotta and garlic,

outside in the dark

some thing will walk beneath 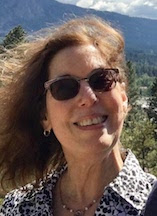 Judith Skillman is a resident of Newcastle, Washington and a dual citizen of US and Canada. Her work has appeared in Cimarron Review, Poetry, Shenandoah, The Southern Review, Zyzzyva, and other journals. She is the recipient of awards from Academy of American Poets and Artist Trust. Her collection A Landscaped Garden for the Addict is forthcoming from Shanti Arts. Visit www.judithskillman.com

By strider marcus jones at April 30, 2021 No comments:
Email ThisBlogThis!Share to TwitterShare to FacebookShare to Pinterest
Labels: Contributors, Poetry

One Poem by Susan Tepper with Art by Digby Beaumont 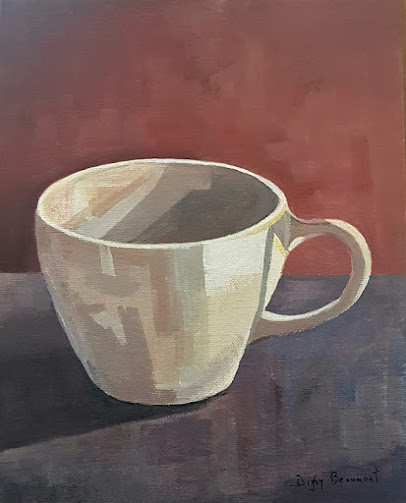 When you left I smashed

seven out of eight.

Who wants to remember

The kitchen mess of ceramic

pushed through the stone wall. 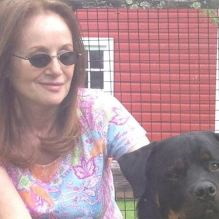 Susan Tepper is a twenty year writer and the author of nine published books of fiction and poetry.  Her most recent are a poetry chap CONFESS (Cervena Barva Press, 2020) and a funky road novel WHAT DRIVES MEN (Wilderness House Press, 2019). Currently, she’s in pre-production of an Off-Broadway Play she wrote and titled ‘The Crooked Heart’ based on artist Jackson Pollock in his later years. www.susantepper.com 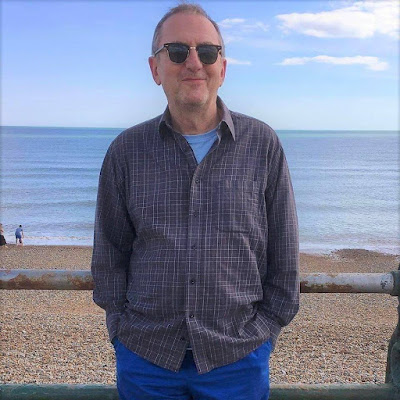 Digby Beaumont is a self-taught artist whose work has appeared in a number of online journals. Much of his work is with portrait and figure painting. He is also a widely-published writer. His short fiction has appeared in numerous print and online journals and anthologies, including The Best Small Fictions. For a showcase of Digby’s work: https://digbybeaumont.com/ .

By strider marcus jones at April 30, 2021 No comments:
Email ThisBlogThis!Share to TwitterShare to FacebookShare to Pinterest
Labels: Art, Contributors, Poetry 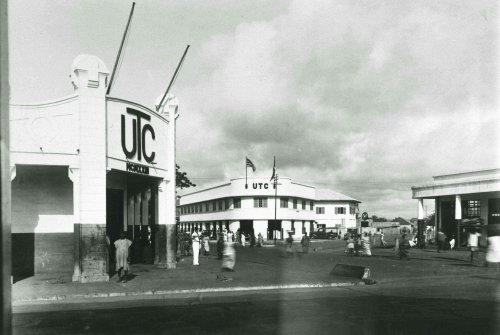 spreading distaste all around in a quickening quagmire

as it prowls the street with intent.

It lurks behind barricaded windows

sniffing for an entry into darkened rooms

sparing neither friend nor foe.

shiny after sprinkles of rainfall

gliding from house to house

leaving behind a sickening odor in fenced dwellings

set far from the main road.

Far in the distance

Another child dead in the night

The third in a row.

My rivers clasps and etches in memory.

It moistens in watery ripples,

the beginning from the end.

That is my river.

It flows along memory banks,

hiding within the depths, treasures traded on love shores.

whispered from the soul of desire.

My river wears a mask

Memories must be preserved

not exposed to public ridicule

in a fit of raging doubt

lest it be mislabeled.


They say I must wake up early to fetch your bathing water.

They even added that I make sure it is not biting cold.

I must even stay to carry away your water pot after bathing.

All this I did and more.

I licked the water off your back.

I smeared scented shea butter across your scarred ridges.

I worshipped your manhood

where I offered scented worship.

I was told to quench your sexual desires

And not pay attention to how my own body works.

I exceeded their expectations

Every night I sprawled across your urine-soaked straw mat

and feigning moans to match your assertions of masculinity.

All this I did

All these I sacrificed.

Now they accuse me of your death

Tomorrow I must prove my innocence before the Council of Elders

My mothers say I hasten the process

So, we can bury you next market day

And I will be off to serve my sentence with the river goddess.

I am not the first

I won’t be the last.

I wear a knowing smile

I know how exactly you died

My incantations were well-aimed.

And so other Wednesdays bear tales of gaiety.

Laughter was served in paper plates

We giggled incessantly deep into the night.

My own Wednesday comes in mournful clothes,

Their monotonic messages of hope

all I need to soothe the scourge of pain.

Sleep sleeps on my Wednesdays

Long before dawn my eyes peer the darkness

And I have to drag half-asleep-slowly-snoring baby

all the torturous way to Special Clinic.

are a sight to behold.

are measured out in exact kilos without scales.

All these are doled out by humans in white overalls.

So, the highest bidder wins the auction

and Wednesday appointments are cancelled. 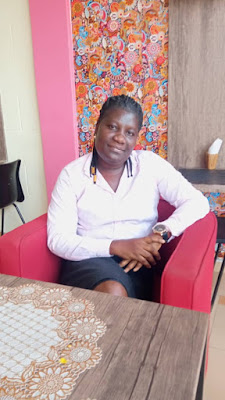 Afiah Obenewaa, is a Ghanaian writer living and working in Ghana-West Africa. Some of her poems are published in online journals like The Mamba, ActiveMuse and PoetrySoup. Her works normally focus on minority groups like women and children.
By strider marcus jones at April 30, 2021 2 comments:
Email ThisBlogThis!Share to TwitterShare to FacebookShare to Pinterest
Labels: Contributors, Poetry

Is cast deep and wide 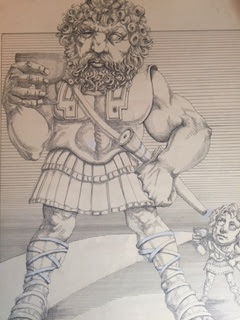 Even in the womb 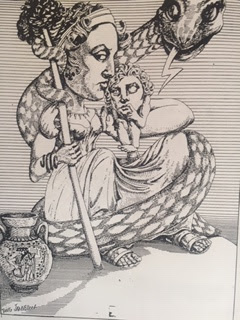 Olympias and her son Alexander the Great drawn by Doug Jamieson 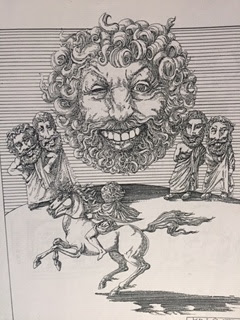 Alexander astride the untameable Bucephalas drawn by Doug Jamieson 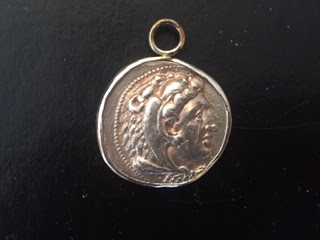 A silver tetradrachm minted during Alexander the Great’s lifetime and owned by Dorothy O’Brien, the author’s commander-in-chief.

John Maxwell O’Brien is an emeritus professor of history (Queens College, CUNY) who has written scores of articles on the ancient and medieval worlds. His best-selling scholarly biography, Alexander the Great: The Invisible Enemy (Routledge), has been translated into Greek and Italian, and is currently being translated into Arabic. His celebrated novel, Aloysius the Great (Propertius Press), features a history professor who is writing a biography of the Macedonian conqueror. Professor O’Brien and his daughter Christine O’Brien are currently collaborating on an illustrated lyrical biography of Alexander the Great.

By strider marcus jones at April 28, 2021 No comments:
Email ThisBlogThis!Share to TwitterShare to FacebookShare to Pinterest
Labels: Contributors, Haiku

One Poem by Gene Barry 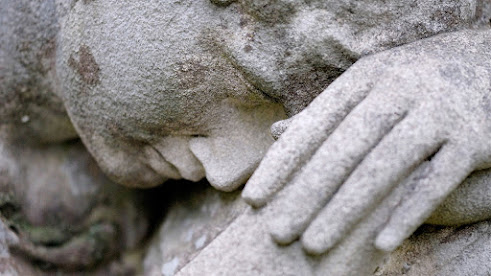 The horse sailed into town,

and without clip-clopping rode quietly

into the arena of a family entertaining life.

Saddle bags of disbelief were dissemination

and crept into love pumps that bleated

of helplessness galloped into each other.

No notch on the rider’s gun handle

for that purposeful void that’s left to linger,

no note of explanation for the kidnapping;

just grief and time to work it out.

Did he stroke his minion lovingly

before they carefully double saddled,

his pillion lapping the choicelessness

and speaking in a different tongue?

Did they both plead and beg and bargain,

spray contrition over each other’s pain,

to be slowly and lovingly unwrapped? 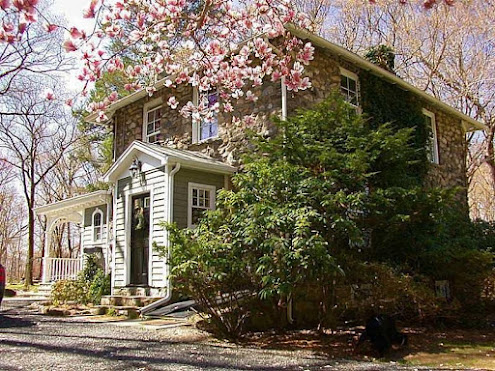 THEY LIVE ON MEMORY LANE

it’s 11:10 am and whoever lives there must be at work the aftermath of rush hour is like invisible tumble weeds through the roads the house reminds me of neighbourhoods of my past before I became poor the rose bushes sway a little in the breeze like they were inviting me in for a lemonade I stare at the house like I belong there and it hurts that I don’t memory lane is a dangerous place to visit 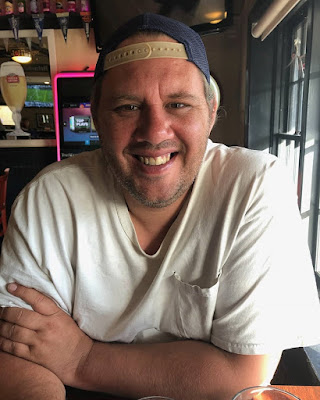 Daniel J. Flore III’s poems have appeared in many publications. He is the author of 4 books of poetry from GenZ Publishing. 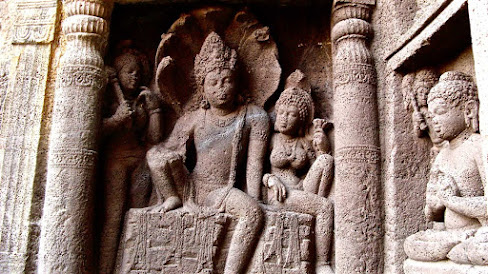 I hate the term emerging poet

I wonder if I should carry the shell

I have not travelled the world

You may think I am ignorant.

I wish to show you one day

How I collapse in the

On which red ants feast.

I fall to sleep dreaming

I am on a magic bicycle that

Can carry all of us safely

across the workaday world

That only a poet

Feels in her veins.

I reach into my heart

That I leave behind.

What am I supposed to

It boils down to inferiority

You are going to

I will not be

It Girl, for Real.

I am the dark

I am the light

I have the right.

To know my rights.

I am not here

This bird will fly 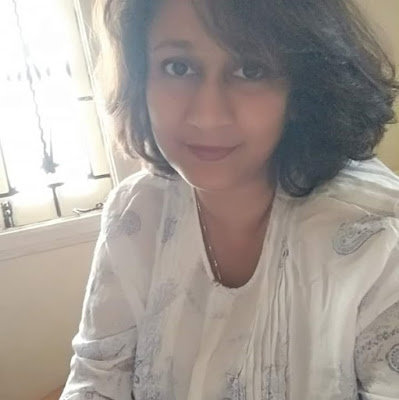 Amrita Valan is a writer based in Bangalore, India and has a master’s degree in English literature.

Her poems and short stories have been published in more than a dozen anthologies and online journals such as Café Lit, Café Dissensus, ImpSpired, Spillwords, The Crossroads, Oddball Magazine, Shot Glass Journal, Poetry and Places, Wink, Modern Literature, Portland Metrozine, The Indian Periodical, The Writers Club and Potato Soup Journal and most recently Short Story Town. She is also awaiting publication in a few more anthologies and online literary zines. 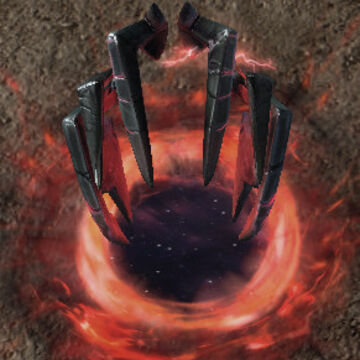 can't stop mumbling, and each of their words

is good for a wastebasket. Each of their gestures,

a torture for geese and humans.

We bought half the Moon

just to hide from them.

How many arms do you need

of the rifts in the void.

into the guts of the sky.

They hardly know the future anyway.

How much paper do you need

to map all the clouds?

When you cease being a word, you are just

a memory of a dancing shadow,

and the universe is roaring in every

public restroom if you care to pay attention.

There is a five-legged sun asleep on the roof.

Fish bloom in the fields, air is cheap.

contemplating the other side of the skyline,

and the psalms of crumbling walls decimate

the ranks of celestial dwellers.

Monsters around the Corner

taking a nap on the wing.

Music is a mistake.

Wine is a humanized

replica of water. It's time

to choose the shape of euphoria:

A Quilt for a Cow

It's cold. It takes time to check

all the doors and windows of the air.

Butterflies sleep in the snow.

in the gaps between discarded lullabies.

Amid the smell of grass pissed over by coyotes,

sounds of animals that doubted my existence,

I was a rusty road sign that couldn’t read itself. 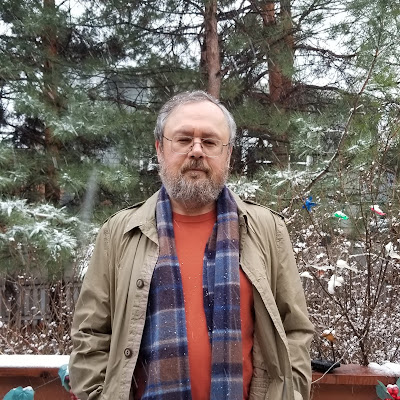 Ivan Peledov lives in Colorado. His poems have been recently published in Eunoia Review, Artifact Nouveau, Ponder Savant, and Fevers of the Mind.