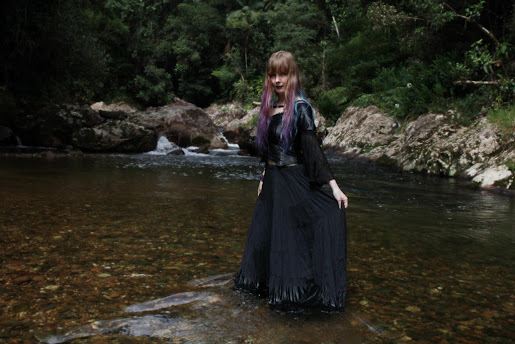 there stands a stone

all shades of grey.

she sat to rest

from work and play.

still to this day.

She sat to long

let them
all dance away.

she changed to match

as time will play.

River Witch
She watched a sister turn to stone.

Realized she was alone.

Her grief welled into a groan

This sister’s choice turned the tide,

until it could no longer hide.

Spilling torrents from her eyes,

Now her river spits and cries.

Fights the banks as if they’re lies.

She melted by that river side,

with its deepest depths allied.

Lays in wait beneath the tide,

seethes with pain and deadly pride.

A single soul dares there to dwell,

all others fled her waters swell.

He alone, to anger quell,

love has tied him to her spell.

She wars with love and hate alike.

He an unwavering dike,

at bay, both passions childlike.

the valley to this danger prone.

dooming both to exist alone. 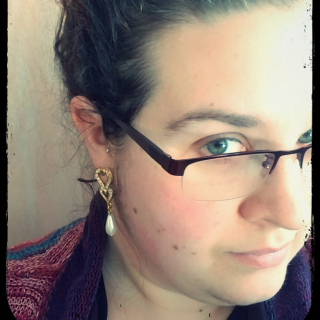 Mary Grace van der Kroef, is a poet, writer, and artist from the Niagara Region of Ontario, Canada.

“Enthroned on Stone,” an early version of it appeared on her personal poetry blog/website last year. It has since been removed, edited, and changed.

“River Witch,” Has never been seen online or in print form.

By strider marcus jones at March 31, 2021 No comments:
Email ThisBlogThis!Share to TwitterShare to FacebookShare to Pinterest
Labels: Contributors, Poetry 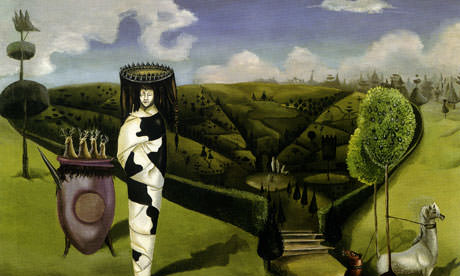 disappearing
as they slumber

its bluish grey a moaning

mirror to the cemetery below

disrobing itself onto
rows of epitaphs

I turn away my gaze

to listen to the wit wit

of a perched swallow.

I see an icicle

The birthing scenes of Charles River

Imagine the sight of a river

melting outside your window

Thrusting itself out of the cracks

of a hardened dawn

devour the blue sky of my eyes

Her bosom of crumpled pleats

The silver of her urging nectar

flowing towards a keen south

Persistent, a haunting and healing

purging the algae of my ghosts

A season is also pushing

its way out of a ripened vagina

for it to emerge

A season finding itself

in rustling sounds and rusted tracks

It shrugs away the grey

and dips into your now crowning presence

I notice how the maples form a nursing dome

on vigil at my window

as an umbilicus uncoils

I crack open a poem

like jasmine that drinks on its own colour
blooming for the moon to tenderly part
the sky into night and day.

like wild rose, burnished dust petals as
if still breathless from a lover’s delight
of that one miracle glance.

like bougainvillea creeping over stones
asking for more, the ruggedness of the
wall whispering freedom songs.

like tulips swaying in open fields, naked
to the sun and unashamed they beckon
the mind to birth again.

like pansies at windowsills, where songs
tend to the soils of their boxed existence
and bring birds to paradise.

like narcissus in morning light, gleaming
into its own champagne. its time, it’s time
to bring home some pride.

like moon flowers that pour miracles into
nights, flaming tongues of thick flesh spit
prayers into our vibrant eyes 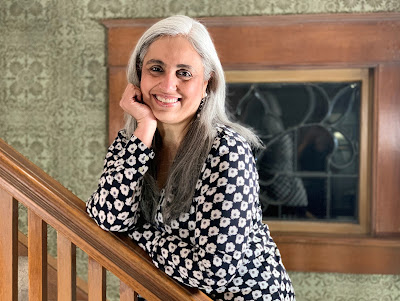 Kashiana Singh calls herself a work practitioner and embodies the essence of Work as Worship into her everyday. Her chapbook Crushed Anthills from Yavanika Press in 2020 is a journey that unravels memory through 10 cities.

One Poem by Dana Trick 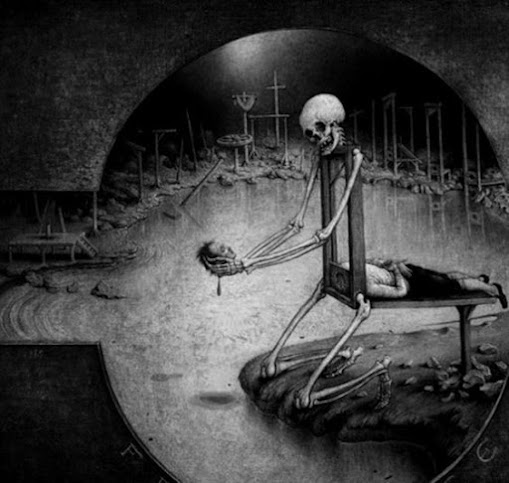 I stare at HER in front of me.

To play a melody.

Why are you trembling?

Why do your eyes tell me you're scared?

There's nothing to worry about.

When we clasped our hands together

And started to dance this fatal song.

Even though I'm scared,

I don't care at all.

Tell me, do you enjoy this?

That gown, those jewels, those flowers,

This ballroom, this melody, this dance

Have been eagerly waiting for you.

This song has been waiting for you.

I don't care what or who SHE is.

I want to enjoy this moment.

You cannot think about them anymore so

Please let this music take you to sleep.

I can't shake off this paradox feeling of

Wanting to live and wanting to die,

As I melt too far into the music,

Cradled by HER gentle skeleton hands.

When she isn’t reading books or being a historian, Dana Trick spends her days writing emotional poems and weird stories, and drawing comic strips that she thinks are hilarious. She enjoys learning about the history and the various mythologies of Latin America and Asia, but her interest is mainly on the history of autism, which she has. You can find her strips at deviantART under the username Silencedbook9 and her blogs on her experiences with autism and ADHD on Art of Autism. She hopes that the reader is having a nice day and if not, she wishes them that.

By strider marcus jones at March 31, 2021 No comments:
Email ThisBlogThis!Share to TwitterShare to FacebookShare to Pinterest
Labels: Contributors, Poetry

One Poem by Laszlo Aranyi

My father is careful, intimidated,

as if guarding the secrets of the Temple.

while I curled up ass-drunk every day.

a generation hidden in camouflage.

made to be a companion of a peculiar sacrament seeking his way.

when he, the sprawling, the depraved stepped across

the malleable border of criminal existence.

Did he ever love my mother?

(’cause I could love only the lewd, perverted women

who shined in their vulnerability.)

It’s possible that their era assigned two ’Outsiders’ to each other.

The Female is alkali, the Male is Acid Tyrannus,

and the insoluble, massive quality they create

is their certain doom. 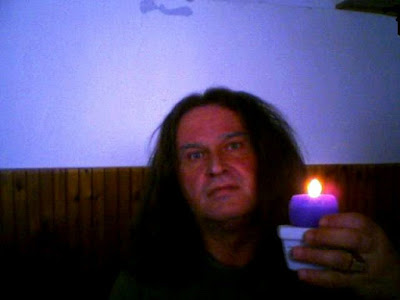 By strider marcus jones at March 30, 2021 No comments:
Email ThisBlogThis!Share to TwitterShare to FacebookShare to Pinterest
Labels: Contributors, Poetry

On Nash’s “A Brief Guide to Rhyming, or How Be the Little Busy Doth?”

“A Brief Guide to Rhyming” was written by Nash

on the grammar of rhyme where he offered a dash

Wise guidance was issued from Ogden’s own pen

because plurals cause problems for women and men

when they rhyme, for it oft’ wanders off its due course—

cursèd source of so many a poet’s remorse.

Though the singular “plural” means many, not one,

the plural of plural is plurals—that’s done

but appending an ‘s’ so we don’t have to guess

when we’re speaking of many, not one and not less.

But “fewer,” of course, is the word we should use

when we’re dealing with countables, not to confuse

them with singular nouns which may have varied mass,

such as weight or percent or this volume of gas.

These too may be counted: “I just drank two quarts,”

but if one drank just one ’mongst your guzzling cohorts

he could say, “I drank less. I drank fewer than two,”

but not say, if sober, “drank fewer than you.”

for the subject and verb should agree face to face

Attention to case can ensure rhyme will please:

we may say “two ears hear” (unless one has disease),

otherwise “one ear hears” (with an ‘s,’ if you please,

for omitting the ‘s’ will cause sonic unease).

“A bother of singles” is plural—or not?

A single may mingle with likes of its kind

and if singles who mingle find one of like mind

unless multiple singles pair up, two by two,

then they’re couples, the plural, when one pair’s too few,

whence the number of couples and kids may accrue.

But my lesson ends here, so I’ll doff my panache,

and, if I had one, I’d tweak my mustache.

Since my pool of wisdom is barely a splash,

may your views not abuse this confangled mishmash.

I’m confident that in this lot

although, perhaps—and this I fear—

it may be here, but maybe not.

I’ve wandered up and down each tier

yet haven’t found it far or near.

My bunions have begun to ache

for I’ve been searching half a year.

So, restlessly, as my keys shake

I wave them in the air to make

my car call out, to scream and beep

As through this parking lot I creep

the heart within me starts to weep;

can I untie this Gordian knot,

Ken Gosse usually writes short, rhymed verse using whimsy and humor in traditional meters. First published in First Literary Review–East in November 2016, since then in The Offbeat, Pure Slush, Parody, Home Planet News Online, Sparks of Calliope, and others. Raised in the Chicago, Illinois, suburbs, now retired, he and his wife have lived in Mesa, AZ, over twenty years.

By strider marcus jones at March 30, 2021 No comments:
Email ThisBlogThis!Share to TwitterShare to FacebookShare to Pinterest
Labels: Contributors, Poetry 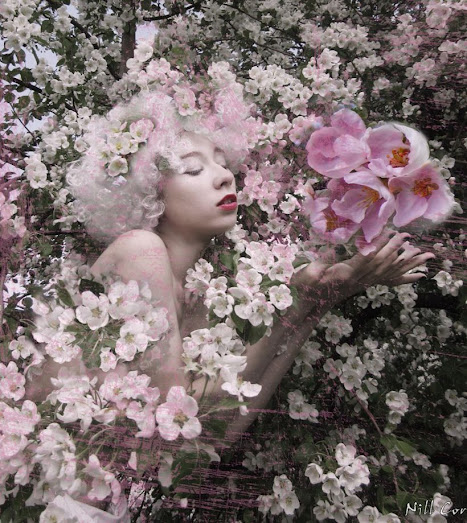 what shall we call this hour

when everything incites lust:

creatures dancing to seduce and breed.

I remain open to your hands.

lift me into your blossoming chambers,

give to me the kiss the poets have known

and I will take your seed.

do not leave me barren,

even a verse will do: something to stir me

from a chilling slumber.

on roots after a drought.

give me a young, green cocoon

to warm in my hands until it hatches

and I will release new life into this lush season.

come, I have parted my mouth for a kiss,

and my fists are as buds, ready to be loosened.

seed, sow their hearts with words of poets.

let the fragrance of passion,

open your blooms as a woman opens.

soon the trees will be gravid with fruit:

an abundance of much love-making.

upon them in the orchard,

the trees to awaken,

you lure me forward and awaken me to birds

announcing the nearness of the sun.

you simply won’t let me ignore

the way you are reawakening everything

that has slumbered through Winter.

I rise, and an accumulation

of dust falls from my eyes,

my covers, the window curtains.

I will join in your rebirth and no longer hide.

it is Wednesday and the mother in me

wants to cradle you to sleep even as the

day is hot and running wild.

Wednesday is the middle, and I believe

we may be stuck in this:

the middle of progress

the middle of misinformation

and here we are, ill and discontented,

and I long, as you, to be comforted—

for the slightest breath of a cool breeze.

we cannot remember winter, or chilly

weeks or months in our delirium.

it has always been Wednesday and we

and even the cool water has turned

the ice machine is broken

the lungs, head, the clock on the wall,

the love of life, dear god,

the middle of the week

and everything in the days before

and hereafter are with me.

surely I am seeing the hours rotate

counter clockwise and it is still

and hot as hell. 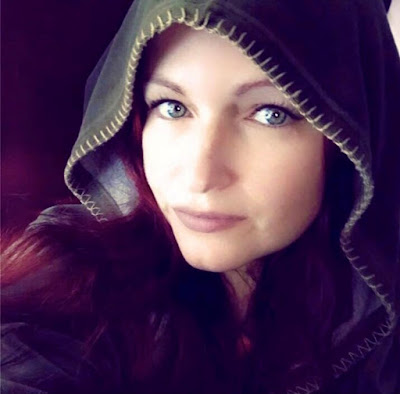 Heather McCuen, formerly known as Heather Dearmon, has poetry published in many

publications, including Fall Lines, Kakalak and Free State Review. She has a chapbook of poetry, water unto light (Finishing Line Press 2014). She lives in Lawrenceville, Georgia, USA.