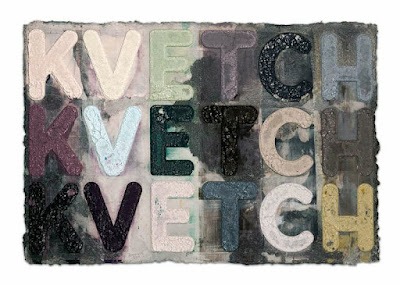 Who was he to never love me,

or he who loved so pure?

How dare i do so in fear be?

How cruel a woe inured—

we could have leavened else

where, betterleveraged. put on some

thing other than my teetering

caprices. being good enough is

just not. why, as a novice,

can i not be more master

when tomorrow is a blank

but a reader. hubristic seer. you

may penetrate interstices, but without

would never pore pages. withheld. with

out. blank, balked breadths. so, sit.

you've no allay for my agitation.

no! not ever. only endured.

much time should i set aside for

learning something as sudden as

sonofabitch! i paid for the soaking

the many things i may. this life,

so very involved with waste.

what then of inquiry

neither student, nor teacher.

what lessens the incalculable?

should one amend the sum?

fail safe for the insuperable,

a supposition where equation fails.

some data are too stark to be rounded—

Post dozing, in a partial state, i perceive your

abiding allure. A distance of tables between, i climbed

atop and drug myself along their edges, through

the tenebrism, toward you & your shadow. echo.

The two of you weren't frightened, simply confused.

Chairs caromed aside, i smiled—clumsily closer.

noNCompanion smiling, until finally i arrived, the final

chair knocked from the table. Your shadow, serene yet

not knowing. What a shame you never loved me,

normally. This face grinning with stupidlove—

The wind, as waves, lapping indifferent.

sticks its semi's. As metronome : 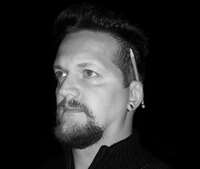 Shine Ballard, the dégagé-dabbler, currently creates and resides on this plane(t). 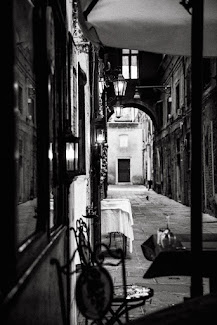 (and if December ain’t supposed to be

Winter then I don’t know what is),

and the wind is moving all the

fallen leaves around in big scoopfuls

and masses, from one front yard

up and down the street, then back again

and settle for the moment), if only just briefly,

before beginning the whole ritual over,

once more, moving it all about

and starlings, or better yet:

schools of tropical fish that somehow

managed to escape the water

A Moment of Clarity

Just a worn-down and twisted spoon

trying to take a break from the thankless

and exhausting job of measuring out all

the moments of our lives, both

little and large, good or bad.

long behind it now)

sitting in the middle of

a shrivelled spider in its belly,

a glow in the dark skull ring

wrapped around its neck,

a single plastic rose poking up

through its mouth and out

into the wide, weird world.

And then there is this ancient

under the strain of its own weight,

or maybe a little more

next to the back-alley door

of an all-night diner, in which

many souls have sat for

Hangin’ Out at the Git and Go

of one more no name, gas station /

grain elevator town with no bar,

no diner, no movie theater

nothing to do on a Friday

or a Saturday night but get

into trouble in some other town

the next county over, or hang out

at the Git and Go, here,

and watch a few cars passing through,

pull in to gas up and walk around a while,

asking themselves, each other

and, finally, one of us

where the hell are we?

A Place to Crash

I went to the porch

thinking I would see rain but

instead it was the

of the leaves of the season

out of the trees (still

to their branches) and out in-

to the wider world

to find a place to

down a little, now

(that mean, old bastard) was back

from his over the

be thinking about hanging

around for a while. 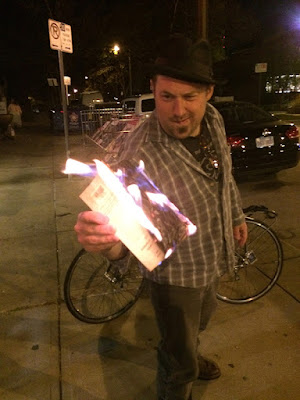 Jason Ryberg is the author of fourteen books of poetry, six screenplays, a few short stories, a box full of folders, notebooks and scraps of paper that could one day be (loosely) construed as a novel, and, a couple of angry letters to various magazine and newspaper editors. He is currently an artist-in-residence at both The Prospero Institute of Disquieted P/o/e/t/i/c/s and the Osage Arts Community, and is an editor and designer at Spartan Books. His latest collection of poems is Are You Sure Kerouac Done It This Way!? (co-authored with John Dorsey, and Victor Clevenger, OAC Books, 2021). He lives part-time in Kansas City, MO with a rooster named Little Red and a billygoat named Giuseppe and part-time somewhere in the Ozarks, near the Gasconade River, where there are also many strange and wonderful woodland critters. 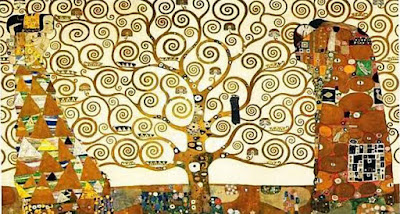 moments we are given

as we breathe and yearn

and grieve and learn

each story is written

for all to hold

of our own unique design

the fondest of which

from the treasury within

our mind’s eye, as we

linger in their bliss

from the boundless sky,

with worth only measured

by the brilliance reflected

in the stardust we leave behind

a tree is planted

eager to bask beneath

and bird’s nest among

from The Maker’s hand

that will lead us through

that usher in new,

to clear the path forward

in all they see,

as it could be

that we may live

for we are here 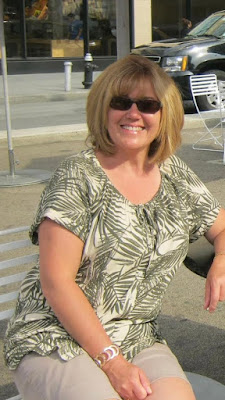 Karen Kerekes enjoys writing poetry that provides hope and optimism during difficult times, focusing on gratitude and the joy that can be found in nature and the simple things in life. 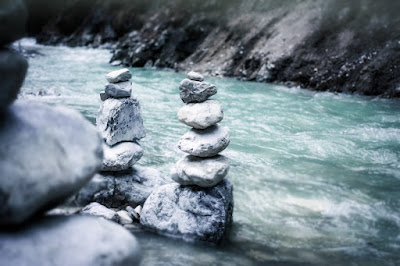 I question the validity of midnights

and other deadlines I must cross

for comings and goings

for making that connection…

but you can't live your Life in suspension

or deny the Source    it's flow

If you want to make a real connection

consider your neighbour opposite you

You can build a bridge on just one breath

if your spirit is strong and true.

You and I without words

are already in conversation

You and I are more than

water under the bridge

In a year of shifting currents   and torturous turns–

I am a river   And everything

that comes and goes

that rises and falls

that turns and returns

moves inside of me

I travel with the sun

and by the light of the moon

along the riverbanks of her mind

while I hold the Mirror

I am water   blessed with healing   thicker than blood

and in communion with all things

I talk with the birds and the wind in the trees

and the heavens reflected above

I sing myself into oceans

and dance on clouds in the valleys below

You and I without words

are deep in conversation

We meet in the flow–

between the rising and falling of each breath.

between the rising and falling of rain

In one drop of water…after it falls…

where all things are reflected

In that moment of transcendence   where

everything still is moving and

everything moving is still

Even Time   as it ripples across your face

and dissolves    as in a mist or in a dream

I long to see my own reflection–

my one true face that waits for me

in a place beyond my longing

I long to hear my one true voice

that carries with it

all the ancient voices

all the streams of consciousness

who have passed this way before–

my mother’s mother my father’s father–

all who have carried me here to you

I am my own defining moment

moving forward with the certainty

I cannot enter myself in the same way twice

I carry your river in mine–one heartbeat at a time.

This is the kiss at midnight

this is the moment that counts--

my mouth as wide as the sky

my heart a vessel emptying into an Unseen Universe

I am a river

and I make this crossing… with you 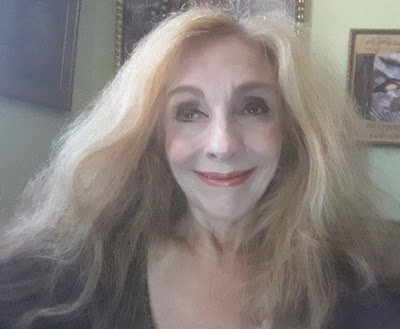 Antonia Alexandra Klimenko was first introduced on the BBC and to the literary world by the legendary James Meary Tambimuttu of Poetry London–-publisher of T.S. Eliot, Dylan Thomas, Henry Miller and Bob Dylan, to name a few.  his death, it was his friend, the late great Kathleen Raine, who took an interest in her writing and encouraged her to publish.  A nominee for the Pushcart Prize and a former San Francisco Poetry Slam Champion, she is widely published. Her work has appeared in (among others) XXI Century World Literature (which she represents France) and Maintenant : Journal of Contemporary Dada Writing and Art archived at the Smithsonian Institution in Washington, D.C. and New York’s Museum of Modern Art. She is the recipient of two grants: one from Poets in Need, of which Michael (100 Thousand Poets for Change) Rothenberg is a co-founder; the second—the 2018 Generosity Award bestowed on her by Kathleen Spivack and Joseph Murray for her outstanding service to international writers through SpokenWord Paris where she is Writer/ Poet in Residence.  Her collected poems On the Way to Invisible is forthcoming in 2022.