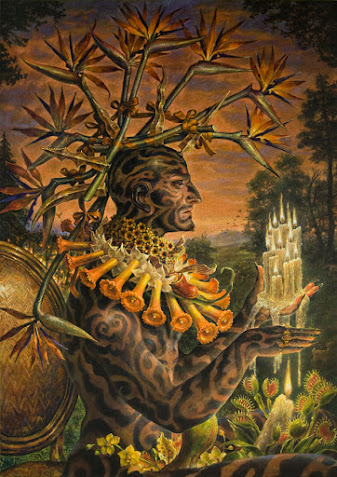 was a bluejay scream
in the sycamore blind,
a sliver in your heel from
the boards to the beach

it was that sultry hymn
to humid reflection,
a sea witch's cauldron
simmering stars

it was just last summer
and decades ago,
a shirtwaist dress
and a raven tattoo.

It won't be easy to settle this score.
Calling to account all the midnights
you pounded around your kitchen
searching for that healing purple mug
and trying to imagine the next

bout. You may have even looked for a tea
blend that would make it all right again
or gone back to bed humming Doris Day's
fatalist anthem to whatever the hell
happens next, reminding us the future

isn't ours. So go ahead, dear one, renew
what you have left. Repot the geranium
you nearly drown with worry and crank
your window open a crack to the warming
afternoon (or whatever it will be). Will be.

The rumple of blanket at the foot of the bed
is not the dog. Neither is the stepped on bone
or the air beneath the window. The powders
and pills of decline are hers, but not her
and I can throw them out now. The cry of wind
through the cactus at night sounds just like her,
but is not her, either, though I pretend it is.

Those minutes I lost at the end were certainly
her and though they come to me over and over,
drop at my feet and tug at all the edges of my day,
they come without her intention or blame. I know
she will be among the pack that nudges my hand
while I sleep under this crowded crazy quilt
of breath, a lullaby from all the lost dogs.

A cigar and the wedding dress

that belonged to her mother was her valediction
that day. When she put her Guild 12-string back
in its case, that girl became a hologram
in black & white, a keepsake to recall
that her smile was the bet she won
with her own voice.

It was 1973 and when they threw their hats in the air
behind this rite of passage they did no violence
to her song. To honour the ritual she settled up
with a capo, a Dutch Master broadleaf
and a hand me down white train
that floated over the field.

First, a fallacy that fixes
my image to the refracted
sun, declares it is fairy prose
and jacks the metaphor all the way
across another empty landscape.

I might stand fast against
that flood of paradox and dare it
to flash into the circle of my health.
It's where I live, after all. You live there
too, with your dogs and books

and the hand-rubbed divine
that leans beneath our every caution.
Like you, I cannot catch that broken
light in the instant it spins away like oil
to an iron drain in a granite floor.

This brutal new era of ours
won't suffer confidence among
the prism of shimmering humors
we will not see, but never fail
to try and balance. 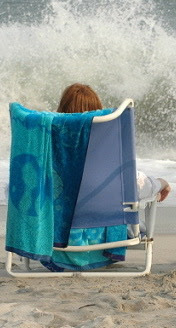 Bio: Sara Clancy a Philadelphia transplant to the Desert Southwest. Her chapbook Ghost Logic won the 2017 Turtle Island Quarterly Editors Choice Award and she is an Associate Editor for Poetry at Good Works Review. Her poems have appeared, among other places, in Off the Coast, The Linnet's Wings, Crab Creek Review, The Madison Review, and Verse Wisconsin. She lives in Arizona with her husband, their dog, a cross-eyed cat and a 26 year old goldfish named Darryl.