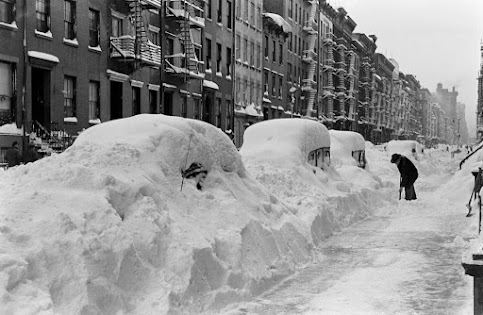 It has snowed all night, at least eight inches, and is still snowing. The neighbourhood whitebeard has traded his felt Homburg for a wool watch cap, and has wrapped his muffler over his mouth against the blowing snow. He nears the ten-year-old who is on his knees, febrifically scooping snow from the huge pile in his front yard, like a badger digging a den. Snow falls, snow blows, snow flies from the hands of Badger Boy. Does a corner of the old man’s mouth twitch up as he passes by? Edith cannot see; his muffler covers his expression.

Sidewalks are not yet cleared of snow, so Edith walks to work in the street in tracks left by kindly cars. There is no traffic to dodge: motorists have been warned to stay off the streets until they are plowed. Behold Edith’s vision: Down the hill a slender young woman is coming her way, then pauses. She stands straight and still on her left foot without a handhold, raises her right foot, lifts off its boot and shakes something out (Snow? A pebble? A pea for a princess?) then slips the boot back on and continues her walk. O balletic arch and spine! O Goddess of Grace, from what gynaeceum hast thou sprung?

Edith is returning home. Her street is still unplowed. The snow has stopped falling, and laughter fills the air. Cars are parked on either side, but down the middle comes a toboggan party. A girl is being pulled along, with friends tramping on either side. They are as merry as feasters strolling toward a fazenda in a favonian breeze.

In the next block Edith pauses at Badger Boy’s house to examine his handiwork. She sees that he has not sculpted a burrow for hibernation—he has built a tunnel for passage. 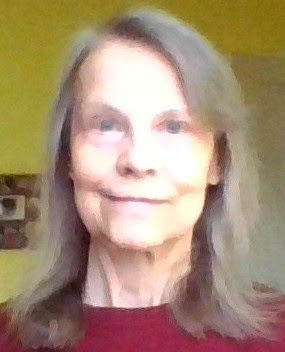 Kathryn Ann Hill has published over eighty-five poems in print and online journals since 2003. At http://pendemic.ie/?s=Kathryn+Ann+Hill you will find her pandemic poems.

She has published six books of poetry between 2007 and 2017. Her Author Spotlight at https://www.lulu.com/spotlight/kah1952 contains a list of these books.
She is presently preparing a seventh book of poems.