One Poem and One Prose Piece by Dr. Koshy A.V.

A Pantoum as an ode or tribute on/to Bob Dylan, Nobel Prize winner, on his 80th Birthday.

It was a world made of love songs, of smoky hate and green-sleeved fate

It cut into the skin, till blood spurted out, visceral and feral

"Clinked, like a coin in the cup of the blind man at the gate"

Made of characters like the fictional Quinn, the Eskimo, and the real Blind Willie McTell

It cut into the skin, till blood spurted out, visceral, and feral

"You came up behind me, I saw you go by"

Made of characters like Quinn, the Eskimo, and Blind Willie McTell

Sad-Eyed Lady of the Lowlands, et tu, a dream and a lie?

"You came up behind me, I saw you go by"

I have been the joker man, forever, and for larks

Sad-Eyed Lady of the Lowlands, et tu, a dream and a lie?

"Look up in the hills, that flash of light." A dog barks.

I have been the joker man, forever, and for larks

In the world of the jukebox bars, the phonograph records will still gently spiral

"Look up in the hills, that flash of light." A dog barks.

I will hold you and dance again, to "rough and rowdy ways", Querelle.*

A reaction to Nero's fiddling

She had grown up in Delhi and found it unbearable. "As a part of the project, three iconic buildings in Delhi -- the National Museum, the Indira Gandhi National Centre for the Arts (IGNCA), the National Archives Annexe -- are set to be demolished..." "Around 4,58,820 square metres in Delhi will be demolished as part of the renovation process, which includes Shastri Bhavan, Krishi Bhavan, Vigyan Bhavan, Vice President's Residence, Jawahar Bhavan, Nirman Bhavan, Udyog Bhavan and Raksha Bhavan." In the middle of a pandemic they still had money for such large scale construction and destruction, such ornateness and ostentation.

She felt her childhood fall away, hearing of and watching the demolitions. The blood in her turned to ice in determination, in anger. They were conserving, they said. What were they conserving? Not her memories of the city she had called home, at any rate.

She stood in front of the .gigantic, new building. It was quite a huge Vista. She had a Central(ized) view of it. She giggled. She looked around surreptitiously. No one was looking. She bent down, took a stone and threw it at one of the windows. The sound of shattering glass was music to her ears. Someone spotted her and alerted the authorities who started running towards her.

The voices floated to her and she started laughing. "Run", someone shouted, at her or the ones approaching, but "she stood hypnotized, rooted to the spot," still laughing, soundlessly, hearing the shattering of the glass again and again in her mind, music to her ears. 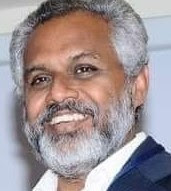 Dr. Koshy A.V. is presently working as an Assistant Professor in the English Department of Jazan University, Saudi Arabia. He has many books, degrees, diplomas, certificates, prizes, and awards to his credit and also, besides teaching, is an editor, anthology maker, poet, critic and writer of fiction. He runs an autism NPO with his wife, Anna Gabriel. Two of his co-authored books published in 2020 were Amazon best-sellers in India and USA, namely, Wine-kissed Poems with Jagari Mukherjee and Vodka by the Volga with Santosh Bakaya.