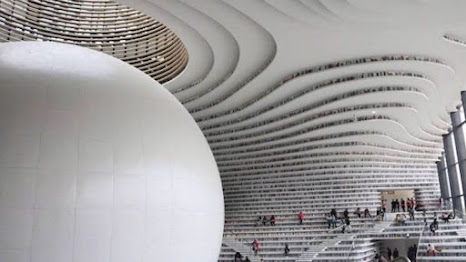 Hard to sleep, women laughing in the other room,

and you can make out some of the words,

though mostly they speak German.

who leaps around the kitchen until you fetch his leash.

All the way down the avenue he follows white birds,

who sweep into the sky as he gets near.

Sometimes the heat gets so intense, you drag him

down to the bridge, cross over to the low banks.

A canoe streams by, and there are ducks with green,

with roots and fallen boughs.

Someone waits for you, a shadow in early mist,

silent partner breathing in the morning with eyes of flame.

Here you’ll find books no one has written yet,

and in the deepest part, the ones no one will ever write.

There are shelves of books about the cuisine of Mars,

and all of them can fit on the head of a pin, where

angels of unwritten books dance in a delirium of delight.

windows that open onto gardens that don’t exist.

in silver kettles, then pouring it slowly over loose,

fragrant leaves, which bubble and shine like tar pits

in an ancient gully somewhere on the other side

of the world. All night, invisible birds fling themselves

from impossible trees, with leaves that float in the air

like tiny boats. The archivists are married to their work.

Some wear gold chairs that jingle when they walk,

but mostly they glide on imaginary wind.

Others wear bracelets made of steel, which open

when they chant a phrase which no one can recall.

Poets go there to dream and die. When they are reborn

as owls, it’s an occasion of great joy, and everyone laughs

until the building shakes and playwrights stumble home

from the bars, the after party having ended with the usual brawl.

How to Interpret Dreams

who sits on dry dock

when clouds smother the sun.

A singer whose broken

a poet whose fingers

skimming down an alleyway,

shoved by the spring breeze, 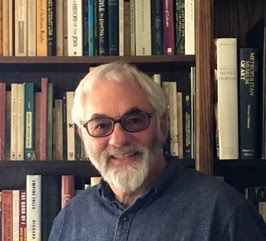 Steve Klepetar lives in the Berkshires in Massachusetts. His work has appeared widely in the U.S. and around the world, and has received several nominations for the Pushcart Prize and Best of the Net.