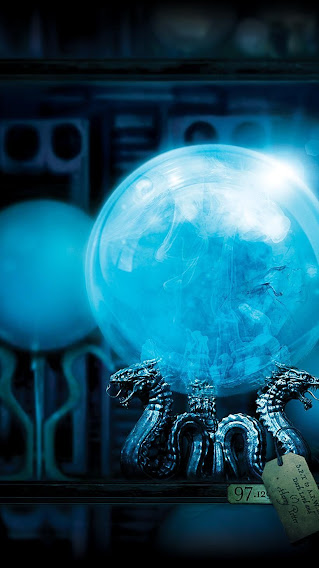 There’s something about a perfectly ordinary sound being reacted to as though it signals imminent doom that is right chilling, when you come down to it; as the phone which nobody seemed to be at all interested in answering rang, and rang, and rang again, Barry looked from frightened face to frightened face with growing confusion and alarm.

Headmaster, Teachers, Houses, the hairnet-wearing cafeteria worker who up until the moment before had looked bored and disgruntled…all were united in fear, all looking as one in the direction of the sound.

If this becomes a movie, which it bloody well ought to, the camera will likely slowly pan down the deserted corridor towards an innocuous, dust-strewn payphone as the ring echoes over and over.

As quickly as it had come the sound was gone. There was a pfaugh as the entire room sighed in release, then a squeench as dozens of metal folding chairs were relaxed upon.

Headmaster Bumblebore blinked, adjusted his glasses and resumed as if nothing had happened. “On this august occasion, as we welcome our newest student in some time, I wish to implore all of you to chew each bite twenty-seven times before swallowing, brush your teeth before and after meals, during if the notion strikes you, and never draw to an inside straight.”

The Headmaster sat ponderously to wild applause. Knowing better than to look out of place, Barry quickly joined in. “Is that it?” he muttered to Ermine, only to smell sausages and find Sniffle standing next to him instead.

“Only the best pre-dinner speech he’s ever given,” Sniffle gushed, eyes shining.

They queued up for the meal, grabbing plastic trays and shuffling along in the proud tradition of terrible corporately-provided meals the world over. “It’s all made by Magick,” Ermine beamed at Barry.

“Yer,” Don agreed from his other side, because of course he was. “The Marbles wish they could have magickal food.”

Near as Barry could tell, the warmed over mac-and-cheese, ice-frosted green beans and speckled-with-heaven-knew-what tapioca was trucked in by the barrelfull from some faceless factory just like everywhere else. “It’s just cafeteria food, idn’t it?”

“You tell me,” Ermine laughed beautifully, grabbing a plastic bowl containing cock-a-leekie soup, or perhaps an attempt at gelatin. “We snuck down here the other day,” Barry managed to suppress a groan at the thought of Don and Ermine sneaking anywhere together ever, “and the trays, the kitchen, everything was empty.”

Barry was still working this out, and also deciding whether he was hungry enough to risk imminent botulism, when they were back in their seats at the table.

He was spared the decision when from his chair, with help, Headmaster Bumblebore stood once again. As he did so Barry whispered “Didn’t he already make a speech?”

“Oh, he maykes several speeches per meal, Barry,” said a fellow SpiffyDoor, holding out a hand which Barry gratefully put down his spoon to shake. “Shameless Winagain, at yer service.”

“Count your fingers,” Don muttered in his ear. “Guy should’ve been placed in Cravenclaw, you ask me.”

Barry did discover his watch missing, which considering it hadn’t been on the wrist he’d extended made it an especially good trick. Shameless handed it back, winking.

“If I can have everyone’s attention, please,” Bumblebore said, belching slightly, taking no notice of the fact that nobody was paying him the slightest mind. “As we have a new student, it seems meet at this moment to remind all students that the Forbidden Forest is open to all, members of the opposite gender are welcome in each other’s dorm rooms as long as you don’t do anything I wouldn’t do which doesn’t leave you with much…”

Having hoped there was some sort of progressive co-ed dorm situation, Barry experienced some disappointment at this proclamation. It was quickly forgotten.

“And as always, though nobody knows what he looks like, you are all encouraged to constantly keep vigil for any sign of Lord Moldywort.”

The room, which had been chatting away, was instantly silent, save for a clatter as the cafeteria lady collapsed under a tray of various wursts.

The silence in the room got even silenter somehow, save for another clatter as the cafeteria lady who had almost managed to regain her feet fell once again.

“I think our dear Headmaster,” said Nape, rising gracefully to his feet like the failed Bolshoi dancer he was, “means to refer to our adversary by his more acceptable title, He Of Whom Nothing Must Be Said For Fear It’ll Get Back To Him.”

“I did say that,” Bumblebore insisted. “I would never just come out and say—”

Before he could come out and say it a third time, likely resulting in a call for medical assistance, Don and Ermine shot to their feet, braying “Headmaster!”

Bumblebore blinked, coughed, blew his nose, examined the result, and then stuffed the handkerchief away before saying “Yes?”

Barry discovered he had the room’s full attention; even the cafeteria lady whom I just realized I really should have given a name to because writing ‘the cafeteria lady’ over and over is becoming troublesome, peered over the edge of her steel counter with hopeful eyes.

He wasn’t at all sure he liked it, though something deep inside told him he’d better get used to it as the adventures in this ridiculous place were likely to revolve around him almost exclusively. Slowly standing to his feet, he felt the weight of Spiffydoor, Huff’n’Puff, Cravenclaw and Shiverin’ eyes upon him. “Yes, well, er,” he began stridently, “on the train, our, er, common adversary’s name came up,”

“Sheenits!” or something of the like came from several corners of the room and Barry hastily continued, “Yes, him, and rather than continue using the fifteen—”

“Sixteen syllable version, I suggested we shorten it to ‘You Know What.’” Having concluded his speech, Barry sat, hoping vainly to not be the center of attention for the next seven years.

Excited murmuring skipped around the room. “Did he really?” “That’ll save loads of time!” “All right, this is a blues riff in B, watch me for the changes and try to keep up, okay?”

Bumblebore seemed mightily puzzled, saying puzzledly, “You know what? What it is I’m supposed to know?”

Professor Nape leaned over to whisper in one ear, and as the confusion worsened Headmastertriss McDonaldgull leaned over to whisper in the other, and perhaps the stereo effect worked because suddenly the Headmaster beamed. “Very well, young Botter. I see it was a fortunate circumstance that brought you into our midst today, as well as why the Sorting Shoe should place you so carefully into Spiffydoor.

“Solving one of our fiercest riddles in your first hour?” Bumblebore nodded sagely at the Huff’n’Puff table, apparently having forgotten where Barry was. “Even your rival dear Darko can’t claim that distinction.”

At this, Darko predictably shot to his feet. “Botter, I challenge you to—”

“Pipe down, Tinfoil!” rang out from McDonaldgull, the cafeteria lady and Haggard, who probably slipped in during the confusion. Barry’s hated rival sank to his seat, quivering with rage.

“By official decree, we shall now refer to our common enemy by the much simpler You Know What, and I must say three syllables is much more convenient than twenty—”

“-and even the four required to say Lord M—”

The fraisch of a hundred or so folding chairs being pushed back covered this, and it seemed, thankfully, that lunch was over. Barry tried to remember if he’d eaten anything, and was grateful not to be sure.

“Show you to the Spiffydoor dorm, Barry?” Don grinned.

“You’ll love what I’ve done with my bunk,” Ermine sparkled at him, causing him to feel simultaneously lightheaded and very thick – erm – skinned.

The three bosom buddies were nearly at the door, not even another challenge from what’s-his-name, when a great harrumph and cough spattered the floor to their left.

It was the Headmaster. “Mr. Botter, a quick word?”

Reluctantly Barry turned away from whatever glories awaited. “Headmaster?”

The aged man was studying him studiously. “You’ve made quite the impression, Mr. Botter, for all that it’s your first day.”

“I look forward to watching your progress—a word of caution, though.

“Should that telephone ring again, and it very well might.” Bumblebore looked over his fingerprint-smeared glasses. “Do not be so foolish as to answer it.”

“There are things in this world, dangerous things, even a star forward like yourself would not begin to understand.”

Simultaneously flattered and confused, Barry leaned towards the flattery. “You know I play, sir?”

“Dangerous things, Mr. Botter,” Bumblebore repeated, patting himself on the shoulder and walking away.

Barry watched him go, wondering once again just what he had been hijacked into—and whether or not he could nip out to the Hogshead Hardee’s for some real food.' 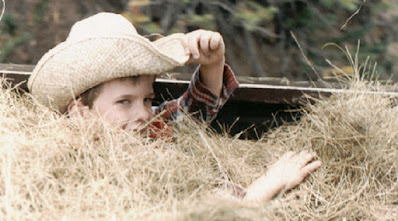 Will Nuessle holds a third-degree brown belt in ninjitsu; rides a Harley; primary care gives a five- and two-year-old (with the third arriving in April) and claims to be able to recite the alphabet backwards in less than ten seconds. He also writes occasionally.